Finding unique ideas for a podcast may seem challenging. But we think there are many ideas inspired by current events that can help to launch and grow a successful podcast.

The goal of our site is to promote the development of great podcasts. But often the barrier to entry is finding a good idea which can get traction and stand out from the crowd. We already have a list of 40 ideas available for a new podcast ready and free for anyone to use. However, we want to also publish periodically a list of topics ideas driven by rising interest due to current events.

We still want to produce quality ideas that can fuel a good show for many episodes allowing their creators to build a large audience. This article delivers 10 highly relevant topics that can pick up high numbers of listenership due to the importance of topics discussed. To have even a better chance of capturing a large audience we advise you to approach a story from an interesting angle.

Also, remember that having unique ideas for a podcast is not everything. The idea has to be researched and you should develop a good content strategy around the topic of your choosing. To help you with this we have a good guide dedicated to this problem. Check out our article: Podcast content planning – build long term value.

1. Human Migrations – how migrations have been shaping up the world since 100.000 years

Since the evolution of homo sapiens, our species has spread from Africa to every corner of the Earth. And staying in one place for extended periods of thousands of years determined our skin color, hair structure, hight, and other physical characteristics. Human migrations have transformed the entire aspect of lands and continents and the racial, ethnic, and linguistic composition of their populations.

The last 400 years have been a very dynamic period of migrations. Curiosity has led to the discovery of continents, islands, trade routes, and sources of new minerals, spices, and culture. This age has also shaped the history of our world as cultures and ethnicities mixed. Some countries were colonial superpowers owning huge overseas possessions.

The discovery of America and migrations from Europe has built the most powerful country in the world. This is what we call the Great Atlantic Migration. The colonial world order had to stop as countries were regaining their independencies. But decades of influenced again shaped the histories and traditions of many places. The slavery driven migrations and mass expulsions also have been part of human history for millennia. The XX century and great wars in Europe also resulted in mass migrations. Before the wars, Europe was diversified ethnically.

Currently, in the early XXI century migrations continue and are driven by a variety of socio-economical reasons. Modern migrations are nothing new and it is interesting how they will shape the global landscape for decades to come. A podcast show dedicated to migrations can be a very interesting study on our society and coming changes.

Every 10 years we expect a form of financial disturbance to take place and impact our economies. The last crisis in 2008 was extremely impactful. It required billions of dollars to bail out banks and struggling, large corporations.

Millions of people around the world have lost their jobs and many well-performing economies suffered huge losses. Many books were written about irresponsible management and heavily deregulated financial system that produced toxic assets. Those assets spread internationally through global financial institutions and slowly have driven banks around the globe to the verge of bankruptcy.

Since it is already more than 10 years from that last financial crisis we can expect the next one soon. The interesting thing is, of course, no one knows what will trigger the next crisis and how severe it will be. You can build a very thought-provoking podcast highlighting bigger problems with the global economy and explore mechanisms of how the next set of problems will spread around the world.

Update: our prediction is, unfortunately, true and among unique ideas for a podcast, this one is terribly relevant. With the COVID-19 pandemic, economic activity on hold, a huge spike in unemployment insurance claims this is a very on-time topic.

With the 2020 U.S. Presidential elections coming up you can record a show dedicated to problems faced by elections around the world. Some of the most prominent problems democracy and elections face around the globe are:

4. The Next Billionaires and how wealth is created

Modern fortunes were created as large industries were being established in the XVIII century. Banking, mining, metallurgy, railroads, etc. The strength and power of those fortunes were heavily dependent on land, minerals, and an abundance of natural resources. Fortunes and accumulation of wealth in later decades was due to amassing of capital and investments in new, emerging technologies. This gave birth to automobile, telecommunication, oil production & manufacturing.

Great, modern fortunes, build from zero in the last half of the century are heavily dependent on ingenuity and innovation. Data gathering, processing, and access have allowed for global companies to be established. Multiple industries have been disrupted and new leaders have emerged on top.

How fortunes will be developed in the next half of the century? Will large companies accelerate or slow down the level of innovations. Will natural resources and land play a role in the future or will new ideas and innovations dominate the filed?

Counting an entire population is an extremely complex and interesting topic. For thousands of years now leaders of nations were counting populations to improve understanding, reinforce control and allocate resources. From the modern governments’ perspective, the overall need for data is quite similar. It is in the details however how the data is being analyzed and used nowadays.

A very important aspect of a population census is determining which individuals can be counted and which cannot be counted. There are also many enumeration strategies. Currently, less often a crude enumeration is used assuming absolute accuracy. With large populations estimating strategies are being used. Modern strategies analyze problems of overcount and undercount. The quality of the data also needs to be tested and evaluated.

This will be a good platform for podcast interested in various socio-economic topics.

U.S. international politics is extremely complex. But relations with important players shape the future of continents and influence national security. For decades now the U.S. and Russia have been engaged in an ideological war, promoting different systems of governments and values around the world. Both countries have been working relentlessly to increase their area of influence around the world.

China has emerged as a modern, global superpower in the last decades. The unprecedented rate of growth China has experienced combined with cheap labor and government-supported investments result in China becoming a world leader in many fields. If the growth rate of its economy will not slow down China will soon be the biggest economy in the world. In what other areas China wants to be a global leader?

Iran and other oil producers from the region of the Persian Gulf are a big challenge to international politics. The stability of the region, forced by the balance of power between countries ensures the global economy can grow without interruptions. However, the region is full of tensions for the decades now. Understanding the complexity and supporting stability may be one of the biggest challenges for U.S. international politics.

Since the opening of the first commercial nuclear power stations in the 1950s, nuclear power has been once recognized as the future of energy production. Currently, we have about 450 power reactors operating around the world. They provide 11% of the world’s electricity in a relatively clean way resulting in a low carbon footprint.

However, after experiencing large growth in popularity in the 70s and 80s the pace of growth has significantly been slower in the following decades. After multiple famous problems with reactors around the world, the public acceptance for new reactors has diminished. Currently, solar and other forms of renewable energy are viewed as the right path for the future.

Which technology will emerge as a winner? Can the safety of nuclear plants be improved to avoid future disasters? Will the technology of solar panels improve in the next decades and become a viable alternative especially in the regions that experience moderate exposure to sunlight throughout the year.

Can you create a company and not be bought out by the competition in 2020? Currently, large corporations sitting on files of cash are buying out small competitors in an effort to prevent them from developing into a major threat. Corporations have learned their lessons. Many of the most valuables companies in the world have not existed 30 years ago. This means that the biggest players from the 70s and 80s have missed many wonderful opportunities. This is actually brilliantly described in the book The Innovator’s Dilemma.

So how can new big companies emerge when large companies are constantly looking out to buy new promising startups? Will this trend slow down the rate of innovation or will it remain neutral?

Translate your podcast idea successfully into a show

Once you decide and choose unique ideas for a podcast, you need to make sure you will work relentlessly on the success of your show. We have a lot of guides and useful tips gathered on this site to help with starting your new podcast.

Two key content quality issues you should focus on when starting are:

From a technical aspect two things you should focus on is getting:

I'm the owner and creator of ImprovePodcast.com, the site dedicated to providing actionable solutions for podcast creators. My goal is helping people to develop their podcasts into effective marketing and sales tools.

How to Scale a Podcast Fast to Over 1 Million Downloads
13 Effective Tips to Increase Podcast Downloads in 2021
Start a Podcast During a Crisis and Recession (Do It Now!)
Podcast Content Planning in 4 Exhaustive and Quick Steps 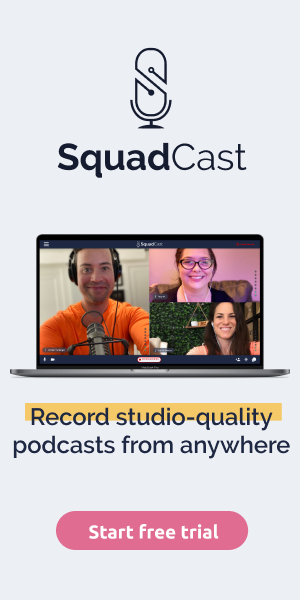